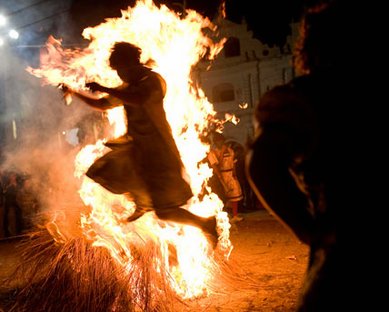 A full two decades after I reformed, the urge came back to set things on fire. Not arson, per se, but a pre-programmed drive to start fires on one particular night of the year—and to jump over the flames. I made six or eight pyres of thinly chopped firewood in my back yard, formed pathways with a few dozen votives, and spent the rest of the afternoon chasing after golpar.

“Gol what?” No one had heard of the fragrant Persian flower. How was it possible that this dried herb could exist only in Iran and Sweden? Exasperated, I called my mother. “I’m making my pomegranate-vodka drink for Red Wednesday, and I can’t find golpar anywhere,” I said. My mother seemed to understand the connection. “I’m sure I included some in that box of spices I made for you,” she said. The box was meant as a survival kit for my American wife, but because everything was labeled in Farsi, it bore a certain offhand statement. I found it buried in the garage, and sure enough it contained the largest stash of golpar this side of the Euphrates.

By nightfall, my backyard was ablaze, and we were jumping: twenty of my new-world friends, their kids, and my own grade-school daughters—their first Red Wednesday. By their age I would have counted down the days, negotiated the size tumbleweed I was allowed to ignite, and come morning of the Tuesday before the Iranian New Year, fire would be all I could think. Eddie, our pediatrician friend known for his seat-of-the-pants quirkiness—he once showed up with a shop vac and two reels of hose to suck out a dead mouse from my heating duct—looked a bit worried. Andrew, a kindergartener, was unstoppable. Four-year-old Ari was possessed.

“So why are we doing this?” said Eddie, stirring his drink.

March 19 marks Chahar-shanbeh Suri (Red Wednesday), the fire-jumping ceremony preceding the vernal equinox, the start of the Iranian New Year. On the night before the last Wednesday of the year, Iranians hold up their pagan past to their Islamic realities. This isn’t unique to Iranians in Iran; the same impulse takes hold of expats in Houston, Virginia, Vancouver, London, Frankfurt, and also in Southern California where a half-million California émigrés exert their pre-Islamic identity more eagerly than most. In Iran, in recent years, the event has acquired a political edge: Iran v. the mullahs. The Islamic Republic frowns on the ritual that predates it, that hearkens back to the nation’s ancestral Zoroastrian religion. Occasionally, when Islam’s lunar-based commemorations run into Iran’s solar timescale, the mullahs ban the outburst. Once, when the Islamic fasting month of Ramadan aligned with the vernal equinox, they deemed the New Year itself unIslamic. How to fast and feast simultaneously?

On my family’s first spring in America, a year after the shah was deposed and the Ayatollah’s Islamic order walled us off from our past, Red Wednesday loomed tauntingly. In preparation for Noruz, New Year’s Day, my mother had started sprouting a thin layer of lentils in a quiche platter. By Red Wednesday, she began to assemble the New Year’s table—a ritual offering of seven primordial S’s. Sprouted seeds—sabzeh—was one. Vinegar, garlic, sumac, apples, wheat paste, and the fruit of lotus trees completed the group. “Can we have a fire tonight?” I asked my parents. They exchanged uncertain looks. “Sure,” said my mother.

I went into the garage, scavenged for anything that could burn, then made a heap on the manicured lawn of our townhouse. When it got dark, I set my junk on fire and started jumping. Your redness of me, my pallor of you, I chanted over and over until our neighbor Bob rushed down with a fire extinguisher. “What’s going on?” he asked. My parents wore blissful smiles, aglow in nostalgia. They cradled one another around the waist and looked on as their son threw himself into the roaring fire. “It is our custom,” said my father, “because next week is the new year.” Bob was utterly befuddled. He noted that the eucalyptus trees all around us were extremely flammable, and “Anyway,” he said, “it’s illegal to start a fire outdoors in a non-designated area.”

A designated area for fire? Who had ever heard of such a thing? Year after year, the fires came back, and panicked neighbors were quick to summon 911. Firemen in heavy, decked-out suits rushed to save our lives only to find us leaping—men, women, children, grandmas and grandpas. But why? they wanted to know. Why? And we tried our hardest to come up with a convincing answer. It was empowering. We were inviting the dead back. The fire imparted life and took away sickness. We were throwing the year’s troubles into the fire, starting anew. Because the mullahs don’t like it hadn’t occurred to us yet.

The last time I jumped was in college, but by then the question had begun to confound me too. Removed from its autochthonous context and confined as it had become to remote fire pits along Southern California beaches, I came face to face with the absurdity of the event. Why start a fire; why on this day; why jump; and what did that damn chant mean? Immigration’s bipolarity had caught up to me, and I couldn’t go on. Four thousand years of jumping ended with me.

Eddie’s questions are often rhetorical. He loves irony, and what better irony than to invite a pediatrician to a family-style fire-jumping ceremony? But he was waiting for an answer, and I was trying to formulate something clever when my daughters interrupted. “How do you say the chant again?”

“Your redness of me, my pallor—”

I was taken aback. Getting my kids to say a few things in Farsi usually involves bribes. Here, for the first time, they were asking to speak it without provocation. I recited the chant. They practiced it a few times in front of me, then tore off to try it the way it was done in the land of their ancestors—forever, presumably.

I turned to Eddie, the question having answered itself. “We do this because we’ve always done this,” I said.